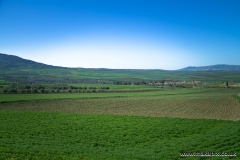 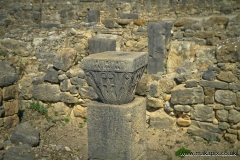 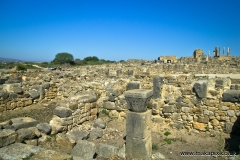 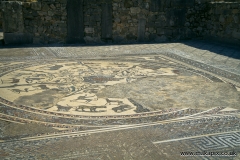 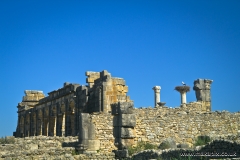 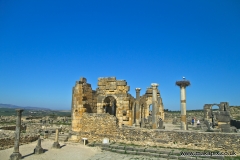 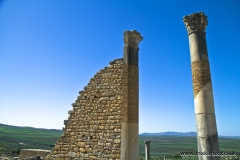 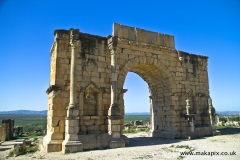 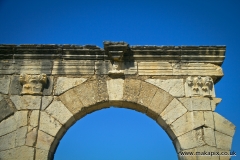 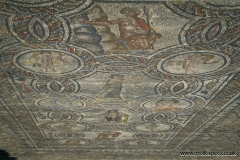 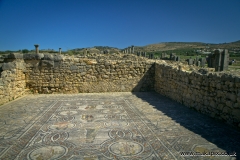 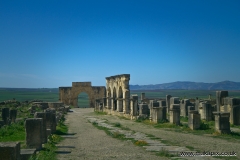 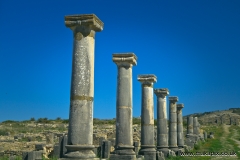 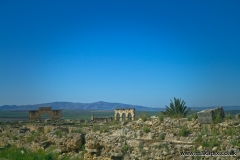 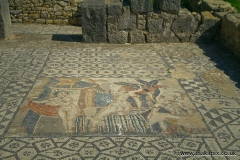 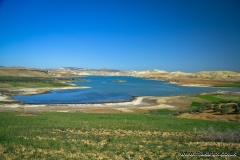 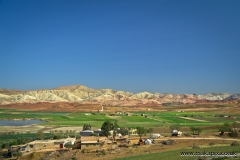 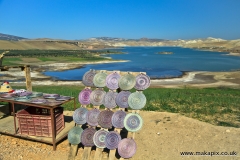 [Show as slideshow]
Volubilis is a partially excavated Roman ruin stretching over a 42 hectare site around 1 hour drive north of Meknes. Designated a World heritage Site in 1997, it is the most extensive and best preserved Roman ruins in Morocco. Founded in the 3rd century B.C., it became an important outpost of the Roman Empire and was graced with many fine buildings of which extensive remains survive. Volubilis latterly and briefly was the capital of Idris I who is buried at nearby Moulay Idriss, a pilgrim town.

Volubilis is located in the foothills of the Rif Mountains, at the foot of Jbel Zerhoun, which help provide security against attack, and was close to the fertile plains below, good for cultivation. 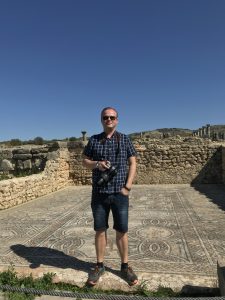 Settlers first arrived from the 3rd century BC and it became a Phoenician and then Carthaginian settlement, and by 40 AD it had a defensive wall and was the capital of the Mauritanian kingdom. When the Romans annexed the Mauritanian kingdom in 40 AD Volubilis became municipium of one of the two provinces that were created, and in the 2nd century it underwent significant expansion (from around 30 hectares to over 40 hectares) with new public and private buildings housing a population of varied ethnicity that grew to around 20,000.

It was on one of the two Roman roads in Morocco that led down from near modern Tangier (the other heading towards the Roman settlement of the Chellah outside modern day Rabat). It contained a principal Roman way (the Decumanus Maximus, where the grandest houses are found), temples (the main one dedicated to Jupiter, Juno and Minerva), a basilica (the most impressive building still standing), a triumphal arch (of Caracalla) and a town wall (2.6 km long) with 8 huge gates. An aqueduct serviced the site and olive oil production provided its main source of income. The remains of buildings dedicated to olive pressing are still readily visible, as are the remains of the original presses and olive mills. 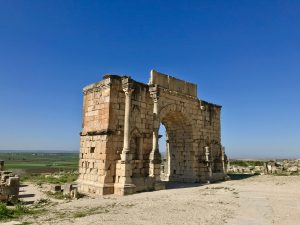 In around 285 AD local tribes took the town and, as the aqueduct fell into disrepair, the inhabited part moved to a new area on the river bank. Volubilis converted from Christianity to Islam before the arrival of (Moulay) Idris in the 8th century, founder of the Idrisid dynasty. His son favoured Fez as his centre of power, but Volubilis was not completely abandoned until raid by the Almoravids in the 11th century, ending many centuries of continuous occupation – from when the site lay abandoned.

The ruins were badly damaged by the Lisbon earthquake in 1755 and subsequent looting of stone. Major excavation works started under French rule of Morocco between 1912 and 1956, although some works had been done for almost a century before.

The ruins of Volubilis consist of less than half of the original town and are set in a beautiful position in the foothills near the pretty town of Moulay Idriss, and the archaeological remains span 10 centuries of occupation by several civilizations. It is notable for the large number of lively and varied mosaic floors, which give a sense of the opulence of the main houses and buildings.