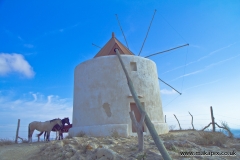 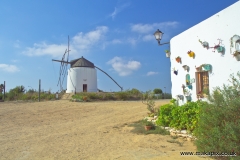 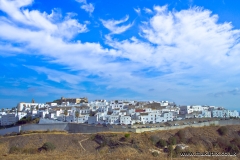 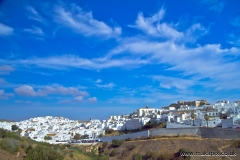 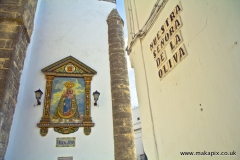 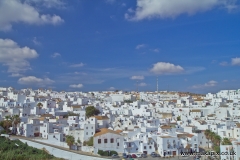 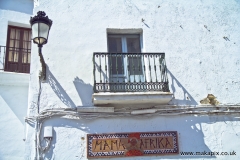 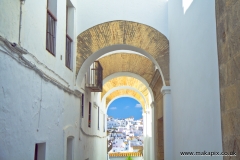 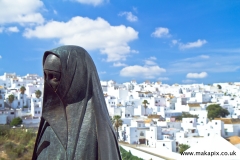 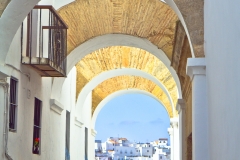 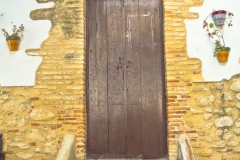 [Show as slideshow]
Vejer de la Frontera is a charming village with many beautiful sights to see throughout.

Plaza de España
A meeting place with numerous cafes and bars around the outside. In the centre there is an ornate ceramic fountain featuring four frogs. The town hall is located in the square and a notable feature is the facade of the fabled Casa de la Inquisición (no. 12 & 13). Arab Castle – is hidden in the old quarter. A classic 11th century arch leads into a courtyard. During the summer school holidays the local scouts and guides will show you around the ramparts.

Church of El Divino Salvador
Like many was built on the site of an old Mosque. The front of the main aisle is Visigothic while the reminder is Mudejar. Santuario de Nuestra Senora de la Oliva – is a local chapel, which houses a 16th century carved image of the Virgin Mary.

Casa de Mayorazgo
Enter the courtyard of this private house and walk through into an inner patio well kept with lots of potted plants. Climb the corner tower of the old walls for a view down to Plaza de España. This is open while daylight lasts. There is no fee – but donations are accepted.

Casa Marquez de Tamaron
This old building is now used as the Casa de la Cultura which is where the local town hall organises cultural events. Check out the notice board. The small municipal library and reading room is located here.

City Walls and Arches
The city walls are very much still intact and you can climb up on to them at various points. There are half a dozen entrance arches such as Arco de la Villa, Puerto de Sancho IV.Sanctuary of La Virgen de la Oliva, Patron Virgin of Vejer.

Castle
The original Castle dates back to the 10th and 11th centuries and is of Moorish origin. It is most likely the oldest inhabited area of Vejer. The present castle was reconstructed after the reconquest. It has two patios: the main patio and the ‘patio de armas’. The main patio has a cistern to store rainwater. The battlement offer spectacular views of Vejer and the surrounding countryside. In the 16th century, the Castle was the residence of the Dukes of Medina Sidonia.

Windmills
In the 19th century the flour mills in Vejer were water driven. The best known is located in the Santa Lucía area of Vejer. Windmills were constructed on the ridge which were able to withstand the strong easterly gusts. The four windmills that remain in the San Miguel district on the edge of the village were built in the 1960s and have since been restored.

Watermills
Outside the village in the Santa Lucia district ( from La Barca de Vejer, take the N-340 north and just after the A-396 turning for Medina Sidonia, there is a very small turning on the right hand side)  continue down here 1km to the Santa Maria district and you will see a sign about the aqueduct, watermills.

Sanctuary of La Virgen de la Oliva
Sanctuary of the Virgin of Vejer is located on the A-314 Vejer-Barbate road 5 km from Vejer. A roman villa and then in 674AD a Visigothic basilica existed on the site. Hermitage of La Oliva, has Pagan inscription and contains relics of St. Stephen Protomartyr, the martyrs Servan and Germain from Cádiz, and the martres Justa and Rufina from Seville. On the 7th May each year a Romeria from the village to the sanctuary takes place.